Always wanted to travel to Netherlands, didn't have the chance 4 years ago while travelling around Europe. We decided to visit the nearest town on the 31st of September - Groningen which is one and a half hour journey from Oldenburg. We started early in the morning and arrived around 10 am. The weather was pleasant and we headed straight away to the town center, 10 minutes walk from the railway station. To our surprise, there was a weekend market with around 100 stalls. But what that caught my attention at the first moment were the flowers markeeter. I had to convinced myself that those are real flowers as their colors were so outstanding, just like those plastic ones in Malaysia. I couldn't resist myself to capture these scenes with my camera although it looked so strange to the locals who are so used to these flowers and perhaps even forgotten to take a careful look at them and to admire their beauty. We spent much time wondering around the market. There were still alot for us to explore. The vegetables were so fresh and relatively cheap. Groningen is also rich with seafoods. We stopped down at a stall serving fried fish nuggest and calamaries as we just had some biscuits for breakfast early that morning. After that, we decided to make use of the remaining time visiting the opera, cityhaus, cathedral etc, that were on our lists of 'must-sees'. I also managed to grab some souveniers and postcards from the tourist information center. We finished much earlier as expected and what to do? My dear and I walked back to the market place to hunt for snacks...we had some Australian home-made icecream, pommes... All are real calories bombs.
We had our dinner at Burger King at the railway station. It was not a spontaneous choice but we indeed planned that. We actually stopped by at Groningen three years ago when we visited London. We also had our dinner at this Burger King before taking the train back to Oldenburg. It was the tastiest burger I have had and the reason was....one could pay extra for some extra cheese...I think it must be local product...It just made a prefect combination with the burger. What a dissapointment that we could not do that anymore this time (the action was over) and we have to settle down with just a normal conventional burger.
We arrived home that day exhausted but with thousands of Calories more...it was a nice trip anayway! what's next? AMSTERDAM!
Posted by huikhee and yoonlai at 4:59 AM No comments:

Köln is one of the nicest town in Germany. I had the chance to pay a visit to this magnificant city that lies on the bank of Rhein. Since we had no plan to spend a night there, we had to make full use of the time we had. Normally me dear is doing all the planning whenever we go travelling but this time I am in charged as he is 'too busy' with his work... We departed early that morning and arrived before noon. We could already see the Cologne Cathedral as our train was approaching. 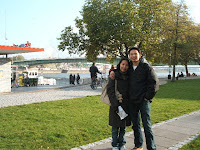 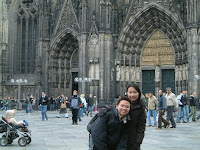 It just sits next to the railway station. We set up our newly bought camera tripod and started shooting, of course together with my dear. I have been always complaining that we took photos together too seldom. I think we shot at least 10 photos together just at the Cathedral. I must admit that it was a bit strange taking photos this way but looking at the photos, it definitely worth the effort. We then walked towards downtown and arrived at the famous shopping street. Actually we planned to have asian buffet at a restaurant for lunch. But guess what, we had KFC... KFC has been always my favourite fast food and I have been missing it since I arrived here. It is a pity that KFC is not so well established in Germany as McD or BKing. I managed to persuade my dear to change our plan although my dear scolded me everytime I ate KFC in Subang. Though we were a bit pessimistic with the KFC in Germany as we tried once three years ago in Hamburg and it was quite disappointing and they only served original recipe. But this time was different, we realised that they served 'hot & spicy' now! It was not as crispy as Malaysia KFC but when you have been hungering for it for the last months, you just enjoy the finger lickin' good experience without taking care of too much details. We even ordered some extra hot wings...We ended up so full and it was therefore not a bad idea to continue our walking tour around the town. I like particulary the town hall and the 'altstadt' (old town). After a few hours of walking and souvenir hunting, we settled down for the famous 'Koelsch" (a local beer speciality brewed in Cologne). We spent some more time shopping after that and arrived home midnight! Ah...almost forgot, my dear finally bought me one more my favourite 'metoyou' bear as I left the bear home. 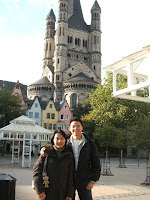 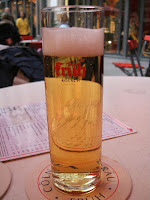 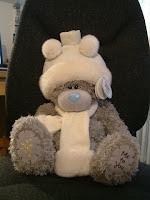