We spent the most time at the Esprit shop, there were so many people and everyone was walking around with a trolley. How crazy are the people? Can you imagine that every trolley was full with clothes and the changing room and the cashier counter were qeued-up by so many people. Some of them were just to reluctant to wait and changed their clothes immediately in front of so many people. Finally we bought 7 pieces of clothes (T-shirts, pants, dress and pullover) costing a total of 70 Euro. haha....quite a bargain! In fact there were a lot of jeans on sell at 10 Euro per piece, but unfortunately I could not find my size.

After that, we went to the Lindt chocolate outlet shop to buy some chocolates. If you like chocolates, you will get crazy here looking at the big packets of 'expensive' chocolates selling at 2 Euros per kilo. Of course the packaging is not perfect, that's why there are sold so cheap. But who cares about the packaging if you are eating it alone. We of course bought 'some' chocolates, haha, i think around 2 kilos. Afterall, it was a stressful day. Will not go there again definitely in the near future.
Posted by huikhee and yoonlai at 5:52 AM No comments:

My dear suddenly thought of making stuffed chicken wings today. He tried this some years ago when I visited him while he was studying here in Germany. The hardest part of making this dish is to debone the chicken wings. Not trivial at all as you have to remove completely the bones while not puncturing the skin. Of course, you have to find some 'giant' chicken wings for this purpose. Those we bought from supermarket are definitely too small and the tip of the chicken wing is normally chopped away. We could however get some really big complete chicken wings from a butchery shop here. At first, we thought of stuffing the chicken wings with ham, cheese and carrot. Later my dear changed his mind and wanted to stuffed it with glutinous rice.

My dear started debone the chicken wings the night before. Since he didn't do it for a long time, it took a while before he finished the first one. The punctured the second one but he was faster. After the fifth one, he got the trick and at the end he managed 12 with no holes in it. It is important that the skin is not punctured as the filling will spilled out while cooking. He then marinate the chicken wings with cooking wine, salt and pepper overnight.

The next day, we prepared the filling. First we cook the rice. Then we fried it together with mushrooms, chinese sausages and dried prawns. We seasoned the fried glutinous rice with soya sauce, pepper, salt and cooking wine. The filling has to cool down before we proceed. Do not be too greedy to fill in too much of the rice into the chicken wing as the filling will expand while the chicken wing will shrink.

After that, the chicken wings just have to fried. Becareful not to puncture the chicken wings here. Serve when they are still hot. The chicken wings are really filling as they are filled with glutinous rice. Two pieces are enough to make a normal adult full. My dear needs three. I must say that it is definitely a calory bomb. So those on diat, becareful :) 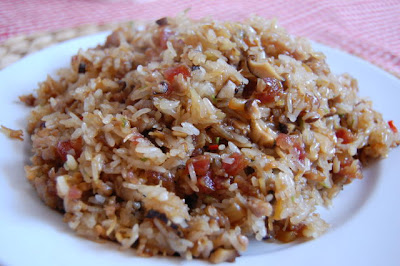 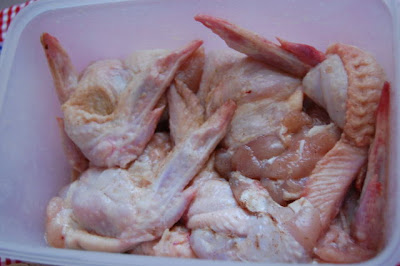 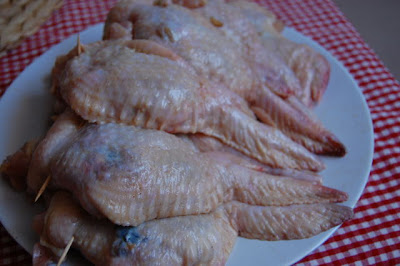 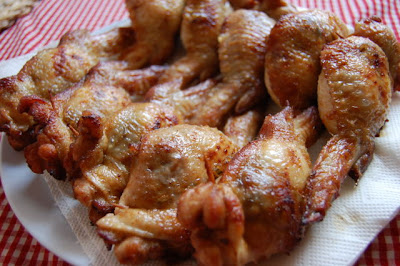 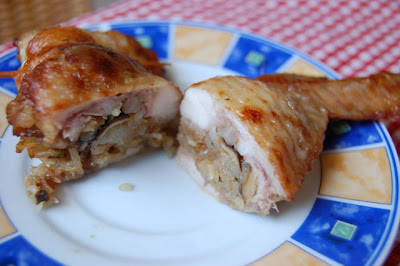 23.05.09 (Saturday)
Since we have public holiday on Thursday and I don´t have Int. Accounting lecture in this week, so I arrived Oldenburg on Wednesday evening. After I arrived in Oldenburg, I went directly to the town to buy vegetables, meats, seafoods and fruits. I prepared steamboat again to celebrate my dear´s birthday (actually his birthday is on 28th May), we made it early because I can´t accompany him on next Thursday.

I just realised that we still have crabs in my refrigerator, so I decided to try kam heong crabs this evening. This recipe is shared by Ohbin. Thank you, Ohbin!! We just fried 50g dried schrimp, garlics, onions, curry leaves, chillies. After that we added in some osyter sauce, curry powder, sugar and soya sauce. Then added in the crabs and fried it until cooked. 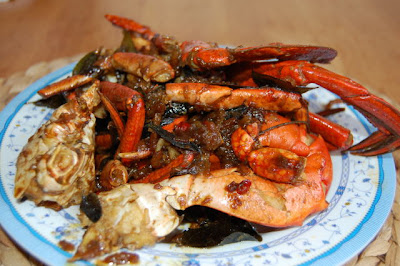 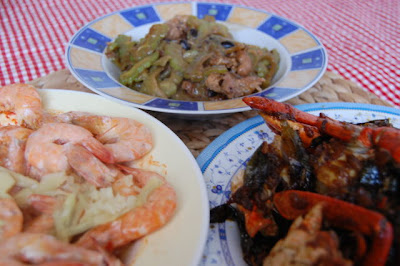 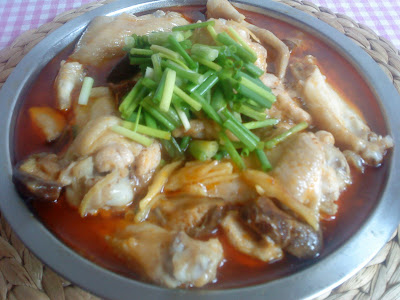 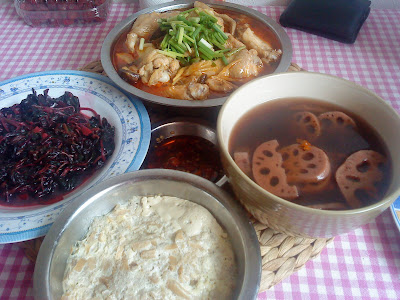 P/S: This photo took by handy.
Posted by huikhee and yoonlai at 5:45 AM No comments:

This evening we cooked chicken floss sha hor fen (rice noodle) as our dinner. This is one speciality of Ipoh, the hometown of my dear. The broth and the right sha hor fen are the soul for this delicious dish. Nowadays, one can eat chicken floss sha hor fen almost everywhere in Malaysia. But the best one can be found only in Ipoh which lies on the unreplacable shar hor fun made in Ipoh. For this dish, the shar hor fun must be thin and smooth. Though it is not possible to buy good sha hor fen here, we got the best one we could get here, some dried sha hor fen from Vietnam. So we tried to make it up with the broth. First, we boiled the chicken soup. Then we fried the prawn shells and added them to the broth. The broth was cooked slowly for some hours. If you get it right, you won't need to season it with salt. We just added some pepper and it was delicious. The color came from the prawn shells, you need it to be authentic.

To put everyting together, cook the noodle, cover it with the broth, debone the chicken, cut into small pieces, put on top of the noodle, add in the cooked prawns. Walah, done. One bowl is definitely not enough for a 'normal' adult. So prepare more, one can never have enough of this. 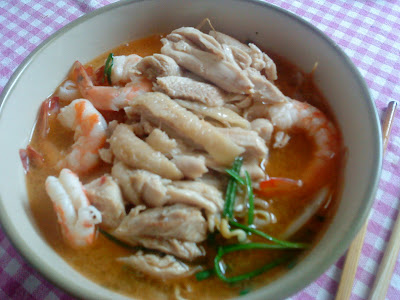 It is a busy and tough semester for me. I just finished my 2 presentations - Corporate Social Responsibility and International Supply Chain Management last weeks. I just can release my stress for the moment. For the following weeks, I will prepare for the last 4 presentations ( 3 presentations in June and 1 presentation in July). Besides that I still need to finish 4 short essays and 3 Hausarbeiten (long essay) before the end of July. How can I manage it?? Time management? Actually I feel so stress and tired for the moment. According to my plan, I need to finish 2 short papers for (CSR and ISCM) and 1 Hausarbeit by middle of June, I hope I can achieve it. Beside that I need to find some interesting topics for my International Trade Policy essay and International Contract Law during this coming holiday. After the holidays, I need to discuss with Prof. and register for the topic with exam unit.
By end of May, we have 1 week of Pfingsten holiday. Thus I need to stay at home and prepare for 2 presentations and finish writing the paper. Haiz...some of my Chinese coursemates will go to Italy for 1 week, unfortunetaly I can not follow. I wish them to have a nice journey in Italy soon!!

How about my dear? He is so busy recently to do all the measurements before the new cancer treatment center which will open by middle of June. He went to the new treatment center everyday for this month and did all the measurements and tested the latest Linear Accelerator from Siemens. Besides he just finished his 3 papers for the DEGRO conference (the 2nd week in June) and 2 papers for the World Congress 2009 on Medical Physics and Biomedical Engineering in Munich (7th-12th Sept). Somemore he is the lecturer in summer term for the nursing school here. He needs to give lecture for 5 hours per week. So pity for my dear recently!!! Both of us must work hard for our future.....

02.05.09 (星期六)
Actually we planned to cook "Ban mien", but then somehow we had the idea of preparing Hakka Yeong Toufu. My dear said he would make some Hakka meat ball he learned from his grandmother. So, we finally made Hakka Mien instead of Ban Mien. My dear started with making the meat ball. He chopped the pork, dried squids, dried schrimps and onions. He insisted on chooping the meat himself instead of buying those minced pork as he said the meat ball would be more "chewy" this way. Then he combined the chopped ingredients with corn flour and seasoning. Important tip from his grandmother, the amount of meat should be the same as the corn flour. Else the meat ball will not hold together when cooked. We also used the left over for filling the Toufu, and lady fingers. The meat ball and Toufu were steamed and the others were deep fried.

We did not find the ideal noodle for Hakka Mien in the supermarket so we decided to make ourself. In fact, it is just way as making Ban Mien. The most important part was actually the minced pork sauce for the noodle. For that, we fried garlic, minced pork and added oyster sauce, dark and light soya sauce, sugar (a bit more than usual), salt and pepper. Thicken the sauce with corn flour. It took us almost 2 hours to prepare the meal but it was really yummy. 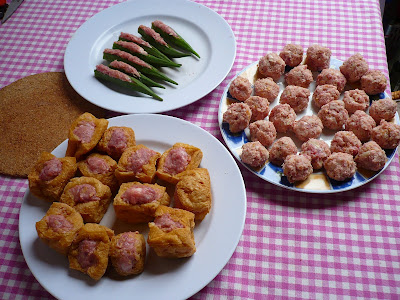 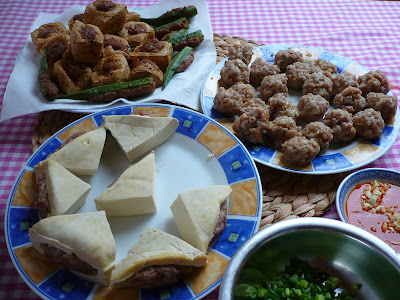 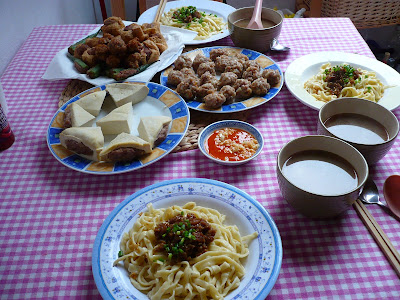